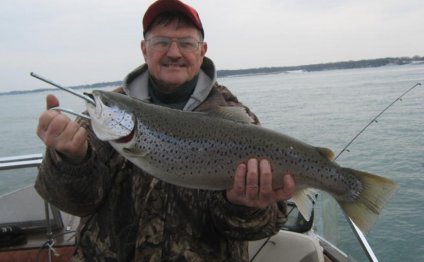 HURON, Ohio — Some late autumn evenings, you can stand along the popular fishing pier that juts well out into Lake Erie here and watch the walleye strap on the feed bag. You don’t see the fish, but you can see the long line of anglers jumping to attention.

“Things will be very slow, and nobody will be catching them, and then a guy down toward the end of the pier hooks a fish, and then the next guy gets one, and so on, all down the pier, ” said Bob Barnhart, owner of tackle supplier Netcraft and a veteran observer of the fall fishing phenomenon on the pier.

“It is like a domino effect. As the walleye move in, chasing big schools of bait, you can follow the action along the line of fishermen. You can almost predict where the next hit will be.”

Using their huge advantage in the low-light hours, these clusters of marauding walleye often treat the hardy anglers to limit catches at sites along the lake’s shoreline, from here to Marblehead, Catawba and beyond to Michigan’s Stony Point.

Some nights the fish are a no-show. Other late evening sessions can produce limits in a short time span.

“There’s no rhyme or reason as to just when they are going to come in and exactly where, ” Barnhart said. “But usually when you see one guy catch one, then everybody is up and catching fish.”

The quirky night bite is triggered by water temperatures, forage-fish distribution and walleye movement. As the lake’s water cools, the general rule of thumb calls for forage fish to move close to shore to take advantage of warmer water found there. The walleye, migrating back to the lake’s western end in order to begin staging for spawning on the reefs or in the rivers, move inshore under cover of darkness to gorge themselves on the bait that has congregated there.

Fishery biologists tell us this activity often continues until ice-up, so in ice-free winters, the fishery can remain active. The intensity of the feeding sprees will lessen as the water temperature drops, but the walleye continue to work the pods of baitfish, which are primarily made up of emerald shiners and shad.

Barnhart said the night bite has developed a cultlike following through the years, and the grizzled veterans of many hours in the cold and dark pursuing walleye swear by some very specific gear.

“They like long rods, 7-6 to 9-feet long spinning rods with large spool reels. They want to be able to cast farther than anyone else on the pier, beyond the lights of shore or lanterns, ” he said. “A lot of times the walleye and the bait will hang on that light transition.”

Besides the proper outerwear to protect you from the elements, Barnhart also recommends a long-handled net for landing fish during the night bite, and an assortment of floating and diving lures that mimic wounded baitfish. The jointed Bomber baits with red heads are very popular, as are the Rapala husky jerks.

“That’s what the fish seem to like, ” Barnhart said.

However, this late fall fishing spectacle is not limited to the shore anglers. Barnhart said he is hearing reports from anglers picking up limits of mixed-size walleye while trolling the water anywhere from Vermilion to Cedar Point.

“Those walleyes are migrating west and feeding along the way, and the key is to get out there and locate those pods of baitfish, ” he said. “The walleyes are where the baitfish are and when you find them, the sonar is showing gobs of bait. If you stay with the baitfish, you’ll catch plenty of walleyes.”

Barnhart said the trollers are moving their baits at 1 to 1.5 miles per hour, depending on the mood of the fish, and using Reef Runners, Smithwick Perfect 10s and Bandit Walleye Deep lures.

Lake Erie walleye pro Ross Robertson said although the calm days out on the lake have been few and far between this fall, he has been catching fish when the wind cooperates.

Robertson is finding fish a little deeper in the water column than usual, and encountering a mixed bag when it comes to size, with an occasional 9 or 10-pound walleye sharing the water with an assortment of smaller fish.

Barnhart said this peculiar mix has not been uncommon this fall.

“It’s encouraging that we are seeing a lot of different-sized walleye showing up in the catch, but it’s also a little puzzling, since they usually tend to school by size. This fall it has been different, and I’m not sure anyone knows why.”

Charter captains on the Great Lakes don’t waste much time testing every new lure that hits the market. They know the two… 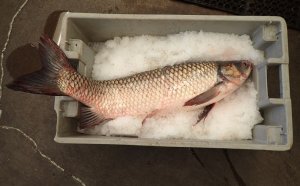 Local Fishing Categories Panfish: Simply put, there is nothing more enjoyable to fish for – be it for the youngsters or the…